Our longest period aboard

As some of you know, this year we have moved our boat from Greece to Italia, namely Sicilia. Our home marina for this season became northwestern Trapani.

As there are cheap flights with Ryan air from Prague to Trapani, we came already few times, but usually for 3 or 4 days maximum. To see something and to repair and upgrade something on the boat ☺

This time we went for 4 weeks in a row, which is so far our longest period to be spent together with our kids on our boat. And out of work ☺

What we have seen

I would divide our journey into three blocks:

1/ Egadi islands – Favignana, Levanzo (and Maretimo, which we did not enter by foot ☺)

2/ Aeolian or so called Lipari islands - Lipari, Salina, Volcano, Stromboli (and Panarea, Alicudi and Filicudi which we again did not cover)

3/ Coast from Trapani to Cefalú - including Palermo and midlands

But before I get to the detailed tips for sailing I will start a bit more generally about Sicily. What we consider interesting (and it is interesting how one fact builds upon another showing the uniqueness of Sicily):

First, it really feels weird when you come from Prague/Czech republic, country of 0 earthquakes and volcanoes active in prehistoric times to a region that has three active! volcanoes – Etna, Stromboli and Volcano. You can climb to them and see the activity on your own. Sometimes you do not even need to climb and you see the fog or smoke from far distance. If we leave the constant tension behind the huge benefit is that the land in Sicily is very fertile.

Which leads to 2nd interesting fact about the island. Sicily is granary for the whole Italy. And has been used as the granary since the Roman empire. If you manage to borrow a car and drive across the midlands (which I strongly recommend) you will see fields and fields of wheat, the famous Italian semolina ☺ Ears of wheat are even part of the official flag of Sicily. 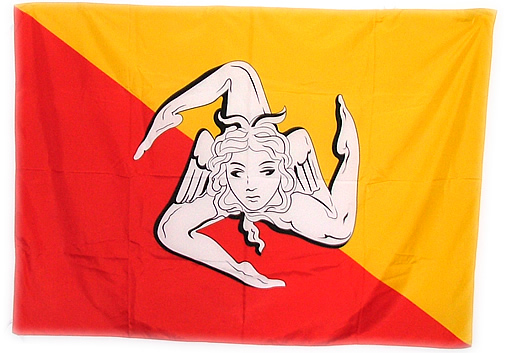 Third, thanks to its strategic position in the Mediterranean see and the fertility land Sicilian country had been constant reason to conquer by anyone who wanted to own the Mediterranean area (from ancient Greeks, Roman empire, Vandals, Spanish, Normans, Arabs, etc.). So nearly in any village in Sicily you can point at a stone and say it used to be Parthenon, amphitheater or remains of roman fortress or basilica). Those who conquer the island were building and adding their part. So you have dozens of beautiful historical towns and archeological sites along the whole coast and in the midlands. Which is amazing! If you compare it for example to another Italian island Sardegna, its density of historical sites is much lower.

Fourth, if you look into recent history of Italy you realize that the whole coast of Sicily it used to be one big tonnare – tuna canneries processing the big catch of the Sicilian fisherman. There is good side and bad side of this fact. The good one is that you can get great fresh tuna around the island either at the fish markets to cook it yourself or in the restaurants. The bad side is that there are not so many tunas in the sea anymore. Majority of the tuna factories, which were fishing tuna in bulk are closed and only small fish boats are allowed to fish. Another reason is that there are not so many fish in the Mediterranean. We ate it :/

You can feel that the whole Sicily is proud of its tuna fishing, which they call “mattanza” - ritual using dense structure of nets capturing bluefin tunas in May and June when they are passing Sicilly. There is great museum made of big tonnara at Favignana (Egadi islands) capturing the whole history.

Coast from Trapani to Cefalú including Palermo and midlands

The first two weeks of our stay we were alone just us with kids. For the 3rd week we had friends coming to Palermo where we had to pick them up.

The first few days we did the Egadi islands and then we took enough time to sail slowly from Egadi islands towards Palermo, the capital of Sicily. We often stayed in marinas and went to the beaches so kids had enough time to play with the beautiful white sand that is everywhere. Though the beaches were pretty full. For the second part of the trip we had enough of people and stayed a lot on the boat as we realized the best swim was directly from the boat anyway.

Also when we realized how rich Sicily is on history we rent a car twice in the first two weeks and were driving around a bit to see some of the historic sites not reachable from the coast.

We also then went back in similar manner to return to our home marina in Trapani.

San Capo lo Vito and Mondello are typical beach towns, head to head, cheek to cheek, umbrella to umbrella. Mondello is more stylish, since the whole town was built as a summer residence by rich Palermo citizens. So you find beautiful villas all around and for Italy extremely well organized and cleaned beaches. In Mondello it was the first time when we went to a beach through a tourniquet and a beach boy showed me my sun bet ☺ San Vito lo Capo is worth visiting because of the scenery – long white sand beach backed by high mountains. What is good, both spots have route for dingy, so we did not have a problem to go to beach with kids from anchored boat.

Zingaro is a nature reserve with all what it brings. It is along the coast so you have several coves with beaches with many people coming over summer. The most beautiful is cove called Tonnara de Scopello. There is no beach but old reconstructed tuna cannery, which is not accessible for public. There are trips organized several times a day so you have motorboats coming with people so over day it is quite busy. But if you are patient and wait until evening everyone disappears and you have the cove for yourself. It is ideal for the overnight anchorage – silence, moon and the beautiful tonnaro.

Terrasini has small marina but with great clean water and beach directly at the marina – super clean water! This is not the case for majority of the marinas in Sicily. So to have a day off on the land where you just do not want to walk long distances from the boat, lay down on empty beach and let kids build their sand castles this is the town. But if you want to do some walking, the town has many street art artifacts around. It is fun to search them with kids.

Cefalú is great combo - historical sightseeing with white beach. You should not miss church with byzantine altar and old public lavatory. Beach is unfortunately pretty busy. Marina in Cefalú is 10-15 minutes walk from the historical center and for the tired ones they offer free electric car pick up.

Castellamare del Golfo is another historical town, which has been built as a harbor for nearby ancient town Segesta. Segesta has been built in ancient Greek era, later conquered by Romans so you have mixture of Greek Parthenon and Roman amphitheater, all nicely preserved. If you do the trip to Segesta you get the opportunity to enjoy the landscape, which is not that far from Tuscany style. What is unsolved mystery is the Parthenon, which has not been finished. One can tell by several uncarved stones that hold the roof.

We were amazed by Segesta archeological park so when we were in Palermo we decided we want to see another bigger site. As Syracuse is even bigger and closest to Palermo we did one more sightseeing of “old boring stones” as our daughter described ☺

Syracuse is great to visit as it is connected with Ortigia. Syracuse is a big archeological park with many interesting sites – Roman amphitheater (similar to the one in Ridley Scott’s Gladiator movie), biggest altar or Dionysos cave. In summer you have theater festival here. Ortigia is historical harbor with fortress, beautiful churches, Jewish quartier, fountains and is famous by mathematician Archimedes who lived here. Not many know he was also great inventor who invented several weapons Syracuse people used to fight the Romans. Thanks to him it took Romans over 2 years to conquer the town.

Marina is pretty big but do not expect bathroom or toilets. The water is pretty dirty. What is great is the kids playground about a minute walk from the marina and hipster street food restaurant at the beach next to the playground. Beach is not for swim as the water is not nice. For swim you need to go to Mondello town.

There is huge Carefour 5 minutes walk from the marina. It is hidden but they have all for replenishing supplies.

On Sundays Palermo closes the main street Vittorio Emanuelle for cars and it is full of strolling people, vibrant restaurants and shops.

There are three things you have to see in Palermo:

This is what we managed in 4 weeks next to enjoying the time with kids, friends and family, swimming, maintaining the boat ☺ There are other interesting topics we delved into like how is it with Mafia now, Italian way of life, Sicilian movies or recipes. We again learned a bit more about our boat and moved another step towards our big journey around the globe.

What made me happy was to see the HUGE step our kids made in living on the boat. They are more confident moving around it, helping with fenders, cleaning the boat and also moving inside the boat when we sail the waves. They do not get seasick just like their mother ☺ and they start enjoying swimming in the open waters just like their parents ☺ And the games they are able to play with the ropes are just tribute to kids fantasy.

Wonderful trip. Thanks goes to the captain :*

We changed our plan